Pakistani actress Mehar Bano got married with Shahrukh Ali. She is famous with the recently popular drama Mere Himanshin. Mehr Banu has not made any formal announcement of marriage till now and neither has she shared any pictures or videos of the wedding ceremony on her social media account.

She chose a turquoise dress with gold and rose gold colored panels over a long loose dress for her mehndi ceremony,. She accessorised in a gorgeous Razia Sultana number, swirled with pink floral embroidery, teal accents with heavy gold jewelry and hints of pearls. For her makeup, she went for soft gold eyeshadow with a peachy pout.

She has played the role of Umama in social-drama Daagh for which she received a nomination for Best Actress at Lux Style Awards. She also played the roles of Batool in ARY Digital’s Balaa (2018) and Anoushay in Mere Paas Tum Ho (2019). 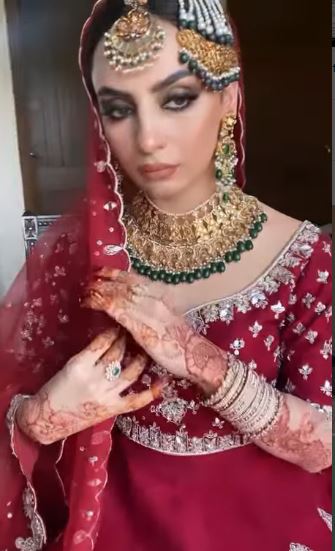 She started her arts career while studying at National College of Arts (NCA) Bano is known for her work in Television dramas. She has played the lead role of Umama in ARY Digital’s Daagh (2012) for which she was nominated for Best Television Actress at the 13th Lux Style Awards. She further appeared in a leading role in Miss Fire (2013), Uff Yeh Mohabbat (2014) and Bunty I love You (2014).

Saad Sami, the artist who did the make-up and styling of the actress on the day of mehndi and barat, has posted videos of Mehr Bano on social media, claiming that the actress has got married and is getting ready for her special day.

Meher Bano is married to Pakistan showbiz industry producer Shahrukh Ali to whom she was secretly engaged in February this year.