University of Health Sciences Lahore has declared the Result of Entrance Test 2016 For Admissions to Medical / Dental Institutions of the Punjab.

The candidates who appeared in this Entry test 2016 would compete for 3405 MBBS and 216 BDS seats in 17 public sector medical and 03 dental colleges respectively.

UHS campus was inaugurated by the President of Pakistan – who is also its patron – on October 02, 2002. Its building has a commanding domed elevation and it houses spacious class rooms, high-tech labs, dining halls, staff offices, senate hall, library and 500-seater Shams Auditorium, which collectively create a perfect academic ambience.
Besides, there are 3000 MBBS seats available in 28 private sector medical colleges and 700 BDS seats in 12 private dental colleges of the Punjab Province.

More than 56,000 candidates (36,000 female and 20,000 male) appeared in Punjab Medical/Dental Colleges’ Entrance Test which was held on Sunday. The test was conducted by the University Of Health Sciences (UHS). 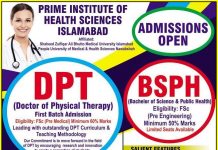 Provincial governments of Punjab and Khyber Pakhtunkhwa have announced a special relief package for conditions arising from the Coronavirus. In Punjab, 25 lakh and...