Islamabad:  Chief Election Commissioner, Punjab, and Sindh elections scheduled for 20 districts in the first phase is approved. According to the law, local elections will be held only after delimitation. The Election Commission of Pakistan has announced the schedule of local body elections in the country

Municipal elections in Punjab, 12 in Sindh, 31 October elections in 8 districts of the 27 districts in the two provinces in Phase huge. dusty number jb the third phase of polling in 19 of 18 districts will dsmbrkupulng 3, the first phase of the 12 districts of Punjab These will be held in Faisalabad, Lahore, Kasur, Nankana Sahib, However, Okara, Lahore, Gujrat, Punjab, Pakpattan, Vehari and lurdan included in the Sindh Khairpur, Sukkur, Ghotki, Shikarpur, qmbrshdad coat, Jacobabad, including Larkana aurksmur. Local body elections will be held only after delimitation and delimitation will take place only after the census.

According to the EC candidate Nabila is from 7 to 11 September will collect nominations. Check the papers from 12 to 17 September, will be able to withdraw his nomination as the candidate for October while the final list of candidates will be released on October 2 and October 31 will be held in the districts.

Sydal announcement of municipal elections, the Election Commission has released the code under which the electoral lists of the districts and freeze any projects will be announced. With the appointments of civil servants in the districts on the conversion will be banned. On the electoral code of conduct, violations will be prosecuted according to law. New constituencies should be formed only after the census and local body elections will be held within 120 days after the delimitation as per law. The Election Commission of Pakistan (ECP) has released details of display centers for the lists around Punjab and Sindh. List for Display Centers in all districts of Pakistan to view Voters Lists.

The first round of local body elections in Sindh will be held on June 26. Elections will be held in 14 districts of rural Sindh with 794 UCs and 3176 wards.
The citizen lists are going to be on show in forty-four districts of Punjab, twenty-six districts of Sindh, twenty-nine of Khyber-Pakhtunkhwa, and thirty districts of Balochistan. If their names are missing, voters may get their names registered at the given time. The ECP has trained over sixty-five,000 officers at show centers to correct mistakes within the Preliminary Electoral Rolls (PERs). The National information Registration Authority (NADRA) two-handed over the PERs to the ECP last week.
The final electoral rolls are going to be revealed on could twenty-five, in keeping with the associate degree ECP exponent. He another that with the info entry of eighty-one million voters, some eighty percent of information entry has been completed by NADRA with the assistance of a half-dozen,000 operators.
Around eleven million new citizens are another to the voter list – of the eighty-one million voters up to now, thirty-one million ar ladies.
Provincial breakdown of voters
In Punjab, 40.95 million individuals are registered as voters. In Sindh, 10.93 million individuals, and in K-P, 10.2 million individuals have up to now been registered as voters. Likewise, within the Federally Administered social group Areas, the names of one.68 million individuals are enclosed within the PERs. In Balochistan, 3.3 million voters have up to now been registered as eligible voters. In the capital of Pakistan, 791,000 individuals are enclosed within the PERs.
Earlier, the ECP had declared that the point in time given by the Supreme Court to purge the lists of imitative votes by Gregorian calendar month twenty-three,  was ‘not humanly possible’, and had wanted help from political parties for extension of the point in time. You can also get more information from the Election commission of Pakistan www.ecp.gov.pk 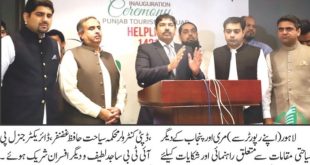 Helpline 1421 For Guidance on Tourist Places in Punjab