Prime Minister Imran Khan has introduced a new scheme called the Apna Ghar Housing scheme, aka Naya Pakistan Housing Program to help the people. According to this scheme, the public is provided 500,000 homes for the deserving with the help of the National Registration and Database Authority (NADRA).

The SBP also provided a solution to the mortgage issue for housing loans, allowing banks to accept third-party guarantees until the ownership documents for the houses under construction are completed. According to the SBP, banks, and borrowers are facing difficulties due to incomplete documentation of affordable housing under construction. To overcome this problem, the SBP has allowed the acceptance of a third-party personal guarantee. The third-party guarantee is valid for a maximum of one year.

According to the SBP, the move will make it easier to acquire real estate under the government’s markup subsidy scheme. Applicants are currently facing difficulties in obtaining housing loans, especially in the case of affordable housing, as banks are reluctant to take the risk of a house that is not yet completed or whose paperwork is incomplete.

It takes time to complete the housing unit and form a mortgage. To address this issue for applicants and banks, the SBP has allowed the acceptance of third-party guarantees for a maximum period of one year during this period.

People were reasonably actively registering themselves for Naya Pakistan Housing Scheme (NPHC) and over 1.1 million people have so far been registered. The scheme for the construction of low-cost houses in Islamabad was started on January 30, under which 31 different financings have been made and Rs 73 lakh 50 thousand have been released for low-cost homes in Islamabad.

The State Bank of Pakistan, in order to facilitate banks in issuing affordable housing loans, has allowed them to accept third party personal guarantees until the construction of the house is completed and the mortgage is completed. Be completed This guarantee is valid for a maximum of one year.

Construction began with a non-governmental organization at the front of the country. prime minister naya pakistan housing scheme.

All information, registration forms will be provided by NADRA at a minimal price. The registration form/application form will be issued by NADRA. While the first step of this housing scheme is to check the requirement of the peoples of Pakistan who want to get the constructed houses.

The pilot project in Faisalabad started at Makoana. Online registration would carry on till Oct 15; official sources informed adding that the registration process has also been in progress in Karachi. prime minister house scheme registration.

Prime Minister’s Low-Cost Housing Scheme Work begins in Islamabad and the first installment of Rs 73 lakh 50 thousand has been released by the federal government.

“The registration process of NPHS was being continuous at the National Database and Registration Authority (NADRA’s) E Sahulat Franchise Centres and online Website with payment of Rs 250 as a fee”, he informed.

According to NADRA, so far 109,475 people of Khyber Pakhtunkhwa have been registered for Naya Pakistan Housing Scheme, 2,065 from previous Federally Administered Tribal Areas (FATA), 477,337 from Punjab, 130,981 from Sindh, 248,424 registrations from Islamabad Capital Territory (ICT), 13,984 from Gilgit-Baltistan, 79,218 from Balochistan, 9,813 from Azad Kashmir have been registered as aspirants for receiving houses under NPHS.

Now talk about Apna Ghar Housing Scheme Eligibility Criteria so there is finding that labor is counted in lower-class so they can get a house in just Rs. 8 lac to 12 Lac.

More over Middle Class and Govt Employees Who do have their own houses will get benefits from this opportunity. They have to submit only down payment of 10% and then they can decide the installment plan that how much they want to pay per month. Apna Ghar housing scheme 2020

You can get your Apna Ghar scheme forms /application form from your nearest DCO Office or the address given below. You can also Download the Apna Ghar Housing Scheme Form Online from the official nadra website or from our website. The photocopy of the registration form is acceptable.

Apna Ghar Housing Scheme Online Form is available from 22nd October to 31st December 2018. The district that has been chosen and offices where you can get the application form are as below.Apna Ghar scheme, nadra Pakistan Apna Ghar scheme,

The applicants of ICT stand first with 248,424 registrations. 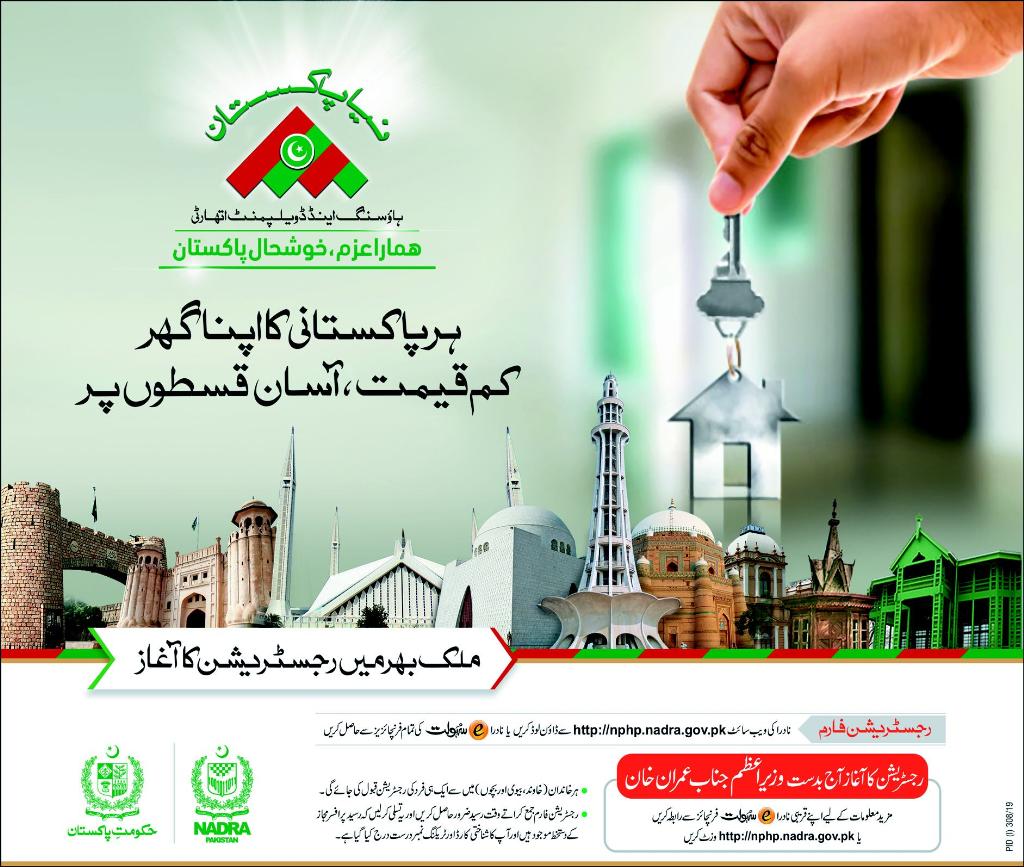 Over 40 percent of applicants were salaried persons. The people can submit forms online at “nphp.nadra.gov.pk”.

You can download the registration form for Naya Pakistan Housing Program by clicking the link below:

PM Imran khan also have made a task force to manage and control all the matters related to this Apna Ghar Housing Scheme 2018. Easy looking for this project needs a time duration and financial aid to build 5 million houses all over Pakistan. Last month task force meetss with the following persons to tell them all the details about Imran khan 50 lac houses plan.