According to the Prime Minister’s Vision for Poverty Alleviation, under the Ehsas Rayaat Ration Scheme, 20 million households will be provided 30 per cent monthly subsidy on food items. Prices of ghee and pulses will come down significantly. Along with this, distribution of cash assistance of Rs. 71 billion under Ehsas Kifalat scheme will also start from today.

Low paid government employees were included in the Ehsaas Ration Program. The Poverty Alleviation and Social Safety Division of the Federal Government has sought data of all such employees of the Federal Government of Pakistan and the four provinces of Punjab, Sindh, Balochistan, Khyber Pakhtunkhwa, Gilgit-Baltistan and Azad Kashmir for subsidy in monthly ration in Ehsas Ration State Program. done. Whose monthly salaries are less than Rs. 50,000.

Those traveling abroad will also be eligible for the ration program. He said that all members of the household can register. Grocery owners can also register on the portal. Mobile SIM must be on ID card. Those with an income of less than Rs 50,000 can avail the program. 20 million families will be given discount on purchase of rations. 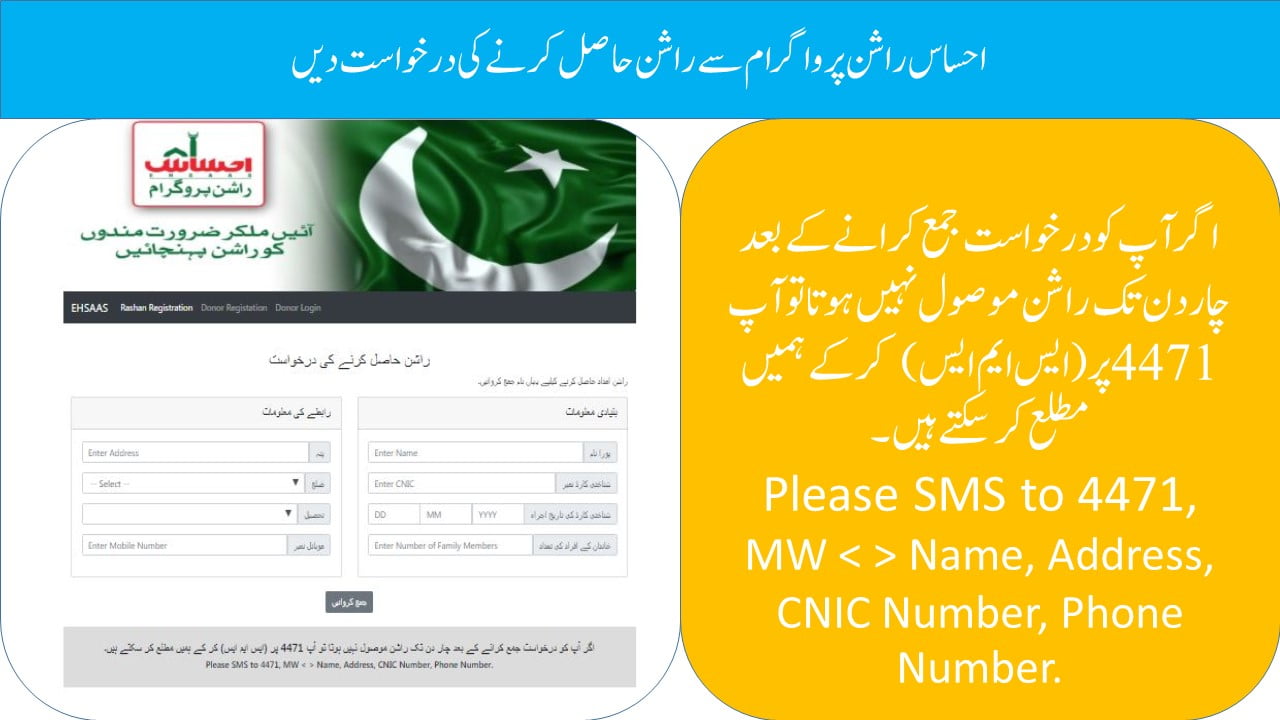 Participants in the program will be able to receive rations at discounted rates from utility stores and any grocery stores. Grocery stores will be registered within three weeks, while grocery store owners must have a mobile Android phone and bank account to register. Under the ration program, up to Rs 1,000 will be subsidized on a monthly basis.

How to Registered for Ehsaas Rashan Program in Pakistan:

For the registration of deserving citizens in the program, a mobile app portal will be launched from Monday on which citizens will be able to register by registering an ID card number from their mobile number. The citizen registration process will be completed in two to three weeks. If you do not receive the ration for four days after submitting the application, you can inform us by sending an SMS to 4471 (SMS).

Eligibility:
You can eligibility on the Ehsaas Emergency Cash Application web portal.

40 million people have registered on the ration program portal

People with an income of less than 31,000 will be part of this program, which is initially designed for 6 months. A budget of Rs. 120 billion has been set for this program. The federal share in the program will be 35% while 65% share will be provided by the provincial governments. Register your donation here to share ration After registering, the list for sharing the ration will appear in front of you.

Such low paid employees will be given a subsidy of Rs.1000 / – per month on purchase of 4 items of flour, ghee, oil and pulses. The federal government has registered 20 million families for this subsidy scheme.

The government has formally launched Ehsas Ration Program to provide targeted subsidy to deserving people. The program will benefit 130 million people from 20 million families. Under the ration program, 30% subsidy on flour, ghee and pulses on monthly basis. Granted, each family will be able to get a monthly relief of Rs.1000.

The Prime Minister has announced Ehsas Ration Program for 20 million families. The program is being brought in the context of inflation and is part of the government’s vision to provide targeted subsidies to deserving people. The program will benefit 130 million people from 20 million families. The people of the province are also being given a subsidy of Rs. 10 billion on flour including the Ehsas Ration Program.