KARACHI: Nazia Hassan, the singer of the style of pop music in Pakistan, is celebrating her 55th birthday today. She was born in Karachi on April 3, 1965, no one thought that Nazia Hassan would come forward to reveal her name and country. Nazia Hassan and her brother Zohaib Hassan are known as the founders of pop music in Pakistan. Nazia performed songs from the mix of Eastern and Western music that are still popular after years.

Nazia Hassan, the founder of Pakistani pop music and the owner of a humorous voice, opened her eyes in Karachi on April 3, 1965. She spent her childhood in educational institutions in Karachi and London. Nazia Hassan, who entered the world of singing in 1975, started her career with the PTV program “Kaliyon Ki Mala”. Her song “Dosti Aisa Naata” became very popular. Nazia Hassan has been singing since she was 15 years old. Get started and introduce disco and pop songs together with your brother Zohaib Hassan. 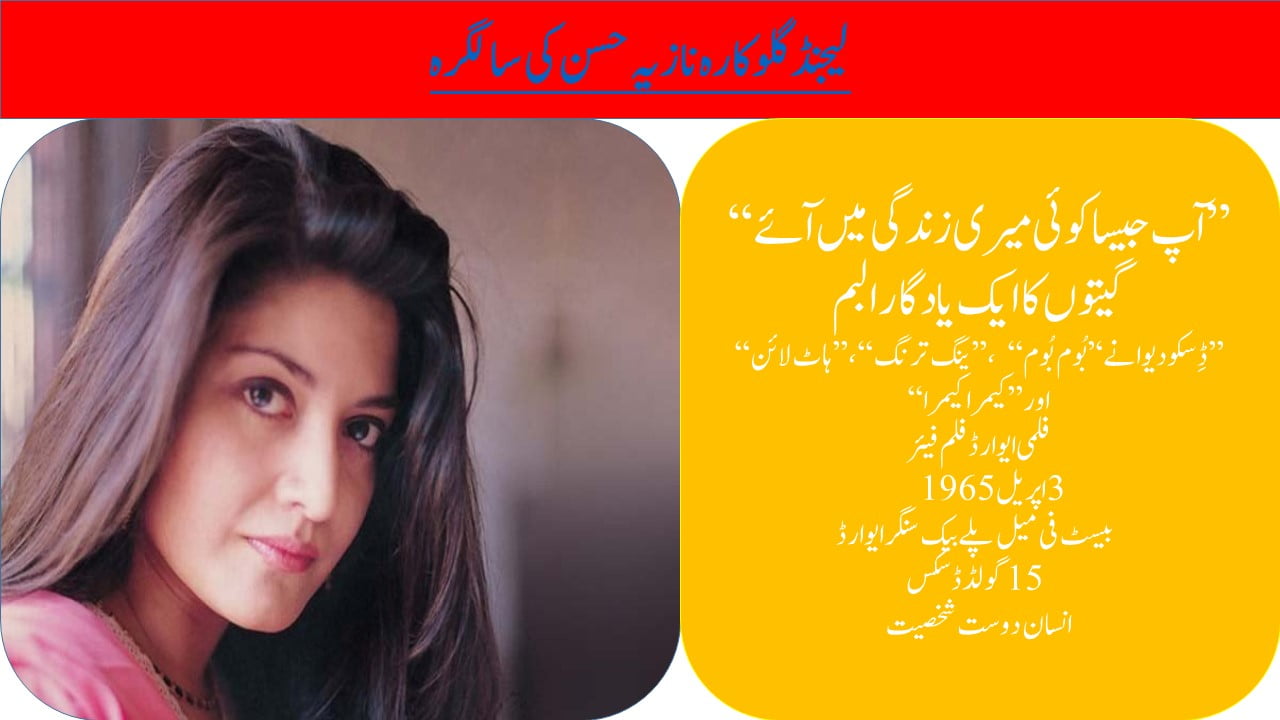 In the ’80s, the song for the Indian film “Sacrifice”, “As You Come Someone in My Life,” opened the doors of Nazia Hassan Prathaphat when she received India’s biggest film award for her song. Was the first Pakistani to receive this award.

Nazia Hassan was an artist as well as a humanitarian figure who is said to have spent all her music on welfare schemes for children, underprivileged youth and poor women living in the backward slopes of Karachi. He was also associated with the United Nations as a political analyst in New York and in 1991 was appointed Cultural Ambassador to Pakistan.

The pop singer was also honored with the prestigious Medal of Excellence for her technical services, while she was also awarded several awards including the Best Per Mile Playback Singer Award and 15 Gold discs.

Nazia Hassan was born in London to an affluent Pakistani family. His birthday or date of birth is on April 3, 1965.

Nazia, as a kid she used to sing around the house with her brother. She was gifted with this incredible nasally voice that was plain yet intriguing. Music was simply a hobby for her and she had never considered singing as a career choice. She didn’t arrive at the crossroads of her musical journey until she met Biddu, a British-Indian composer. He was really impressed by the nasally quality of her voice. After discussing his thoughts with Feroz Khan the director and star of Qurbani, Nazia was asked to sing what would become her history-making song, ‘Aap jaisa koi.’ And that was it, her crossroads, and she chose the path that began her musical adventure.

Nazia was 35 when she passed away. It seems that it was only yesterday with her fresh, innocent looks and melodious voice sang the hit song Aap Jaisa Koi Meri Zindagi Mein Aaye, capturing the hearts of millions all over the world. Recorded in England by a 13-year-old Pakistani schoolgirl Nazia Hassan, the song was an upbeat blend of the East and the West. After achieving fame followed by a short stint as a political analyst for the United Nations in America, she had just begun to relish life when disaster struck. She was diagnosed as having cancer of the lungs. The illness ultimately took her life.

Rarely has anyone so young been so widely celebrated for her contribution to music. Nazia has been called Pakistan’s first pop diva, whose three major albums sold millions of copies and whose celebrity status spanned over the whole world. Nazia, who had no formal training in music except for a few music lessons under the guidance of Sohail Rana in Kalyon ki mala, later joined hands with younger brother Zoheb. Nazia and Zoheb’s three pop albums changed the tide, showing confidence in indigenous lyrics and rhythm and presenting a new fusion of the East and West in pop music.

It was followed by another hit, Disco Deewanee, released in 1981. The album made history by achieving gold status on the day of its release. Nazia and Zohaib, then traveled to Pakistan in early 1980s and released their first album Young Tarang, containing famous songs like Dum Dum Dee Dee Dum Dum. It was followed by a few more, which made their popularity soar. The two were called the trendsetters of disco music in Pakistan. Their last volume Camera Camera, released in the early 90s, consisted of popular songs. Nazia’s suffering is over. The pain is gone. She is no more but she will always live in the hearts of those who love her.

Nazia Hassan, who has died of lung cancer at the age of 35, revolutionised Asian pop music. A singer of rare expressiveness, she pioneered the disco revolution in Indian film music in the 1980s.

If Someone Like You Comes Into My Life, the song she sang – as a 15-year-old schoolgirl – in Qurbani (Sacrifice, 1980), was one of the biggest hits in Bollywood film music. Young Asians in the sub-continent and Britain took to the dance floors to its tune.

Born into a well-to-do Karachi family, Nazia came as a teenager to London, where the song was recorded after she had met Bollywood filmmaker Feroz Khan at a party. She was not a trained singer, but Feroz, and the London-based composer Biddu, liked the nasal quality of her voice.

Nazia’s association with Biddu brought her into the limelight on the British Asian pop scene. Together, they brought out the immensely successful album, Disco Deewane (1981), which, with its racy songs and harmonious blend of eastern rhythms and western beats, was number one for more than a year. Overnight, Nazia became the queen of Asian pop.

Later, she and her brother, Zohaib Hassan, sang in another Bollywood film, Star. They returned to Pakistan in the early 1980s and released their first album, Young Tarang. Another album, Hotline, followed in 1987. Nazia’s last solo album, Camera Camera, came out in London in 1992. Though some of these later albums lacked Nazia’s early expressiveness, they still revealed her joie de vivre.

Nazia, who had a London University law degree, lived most of her life in Britain, but always returned to her roots in Pakistan. She was independent, and was never afraid to speak her mind. A lot of her money was given to charity; she also set up an organisation to help the poor, and – even at the peak of her popularity – made special appearances on television shows for children. She spent a lot of time with young people, educating them about the dangers of drugs.

The famous singer has always shared happiness with others through her voice, her albums dominated for many years. His fame spread throughout London in the late ’70s, when he was approached by renowned musician Bido, and his first album,’ Disco Deewane ‘, was recorded there, captivating half of Asia because of its I had a glimpse of English, Urdu, Hindi, Classic, Disco and Pop. “Disco Maniac” was heard in 14 countries and was considered one of the best songs in Asia at that time.

At the age of 35, Nazia Hassan, who touched the heights of fame with her voice, was diagnosed with lung cancer, and the creator really did, but her technical services will always be remembered.