LAHORE: The Punjab government has inaugurated the Orange Train on October 26, 2020. The Orange Train ticket will be Rs. 40. The Chief Minister of Punjab travels on the train along with the ministers and members of the Assembly. The world-class public transport public project Orange Line train is completed in Lahore. Get more information from the orange train Lahore official website.

The public will travel from Monday 26th October 2020. You can check Orange Line Metro Train Route Map, Stations Location, and Ticket Price in Lahore. People can travel from Ali town to Dera Gujjran 27 KM long route will cover in only 45 Minutes. The Orange Train will run from 07:30 a.m. to 11:00 p.m. The train will run on the track for 16 hours daily. 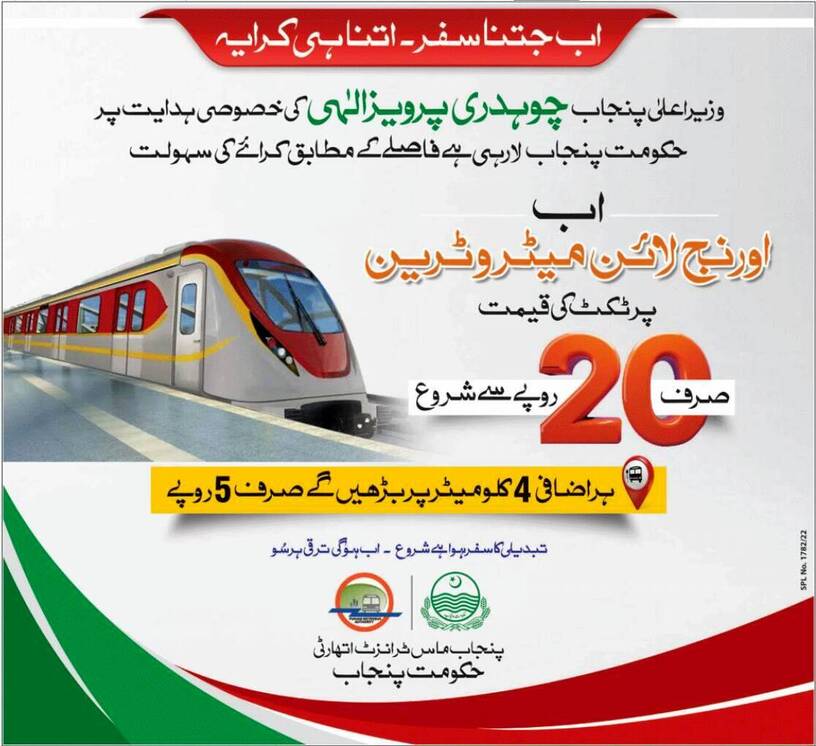 This is a unique people-friendly eco-friendly project which will benefit millions of people every day. Punjab Mass Transit Authority official website www.pmta.gov.pk or call on helpline number 042-111-222-627. Free travel facility to senior citizens and special persons in Orange Line Metro Train. Women and students will be given a discount package in Orange Metro Train fare. Orange line train fare will be fixed stage wise.

Punjab Chief Minister Usman Bazdar will inaugurate the Orange Line Metro train today and citizens will be able to travel on it from tomorrow. Coming to the Orange Train track will not only provide clean travel to the citizens but will also help in reducing pollution by reducing traffic congestion. The train also has Wi-Fi and separate seats for the disabled. It will also be able to use a metro bus card.

This is the first train under the mass-transit project In Lahore. The Orange Line Metro will be the first train that runs on electricity underneath the mass transit challenges. Work has been completed on 13 stations, starting from Dera Gujran to Anarkali.

According to the orange line train map, the Metro train will run between Dera Gujran to Anarkali, whereas, the concerned authorities decided to conduct it’s a test for running it through electricity after the completion of 13 high-voltage substations in Lahore.

The construction work of 11 other stations will be completed by November, signaling that the first-ever mass-transit project will be made operational soon after coming out of its trial period to run the trains through electricity. More than 2000 police officers and personnel were deployed at 26 stations on the Orange Line Metro train route.

The Orange Train will be tested for three months by the mechanical, electrical and brake systems of the Chala Cross and citizens will still have to wait another 3 months for the train journey Punjab Chief Minister Usman Buzdar as the chief guest of the event for the launching of its testing phase.

The chief minister said that the people will be able to travel through Metro trains from January 2020 and its fares will be very cheap. Buzdar directed the concerned authorities to speed up the work to make OLMT project operational for the Citizens.

The project was initiated with a signed memorandum of understanding between the governments of Pakistan and China in May 2014. Financing for the project was secured in December 2015 when China’s Exim Bank agreed to provide a soft loan of $1.55 billion for the project. Construction works on the project began in October 2015.

According to sources, the report has been prepared by the Finance, Planning Board and Transport Department, which revealed the fact that the project is estimated at 12 billion 72 crore subsidies this year. The Punjab government will provide a trillion 93 billion 55 crores 68 lakh 58 thousand 397 annually for the next 20 years, amounting to 9 billion 51 crores.

Orange Line Train is an automatic rapid transit system in Lahore Punjab. This is the First Orange line Train which is started in Lahore. OLT is a part of the China Pakistan Economic Corridor and the Government of Punjab has financed the Orange line Train.

According to the report the train fare has been prepared with regard to keeping at Rs 30, stating for 20 years that the provincial government will provide loans from 2024 to 2036.

Orange Line Metro Train Lahore List of Station is given below orange line train times and The fare of Orange train will be fixed at Rs. 40 to 50.

Orange Line Train one-way fare of Rs 40 is expected and final decision on fare will be made after the approval of Chief Minister Punjab. orange train map, orange line times

Underground station features are automated doors between platforms and trains.orange line station near me

Central Station is a single underground level, in order to reduce the maximum gradient for trains from 35% to 30%. Rail tracks are 9.7m below street level at Central Station. Central Station is located at the intersection of The Mall and McLeod Road, in front of Lahore’s General Post Office (GPO) and the Lahore High Court.