The two-day meeting of the Foreign Ministers of the Organization of Islamic Conference (OIC) is starting from today for which guests are continuing to arrive. A delegation of Secretary-General of the OIC, President of the Islamic Development Bank, Deputy Prime Minister of Iraq, Deputy Prime Minister of Kazakhstan, Foreign Ministers of Palestine, Mauritania, Minister of Finance of Guyana, Burkina Faso has arrived to attend the OIC Summit. 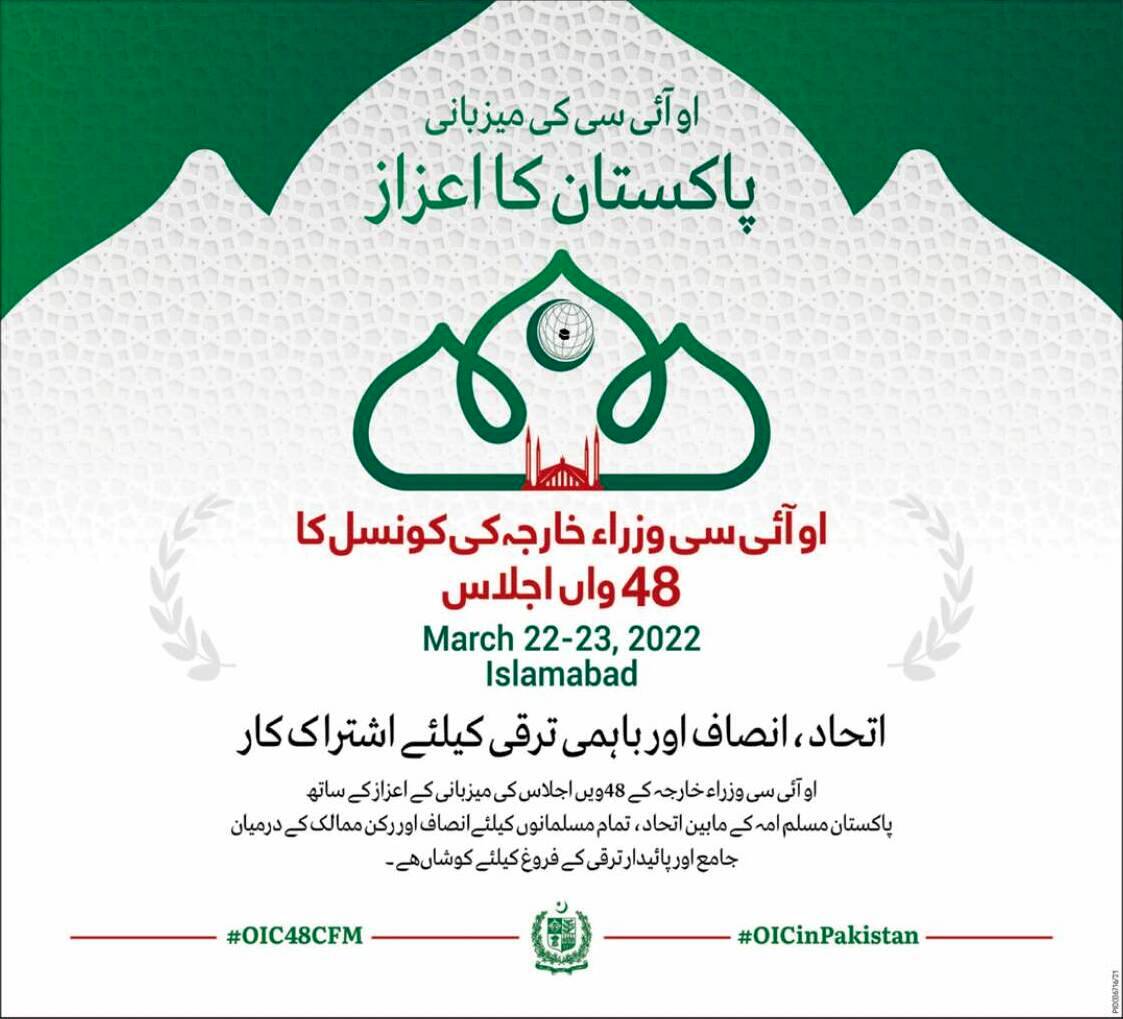 Prime Minister Imran Khan has welcomed the delegations of all member countries coming to Islamabad to attend the OIC Summit. The OIC Council of Foreign Ministers will meet in Islamabad on March 22 and 23, with the participation of Ministers from 48 member countries. The official anthem of the Organization of Islamic Cooperation (OIC) is launched.

The theme of the hymn is ‘Hold fast to the rope of Allah and do not fall into division’. OIC Foreign Ministers Meeting will be held in Pakistan at the suggestion of Saudi Arabia. Secretary-General OIC, Assistant General Secretaries, and Foreign Ministers of Islamic countries arrived in Islamabad to attend the OIC Summit.

Pakistan is hosting the OIC meeting which is being held at the National Assembly Hall of Parliament House. The hall was decorated with flags of Islamic countries. The 48th two-day meeting of the OIC Council of Foreign Ministers will be held on March 22 and 23 at Parliament House Islamabad. 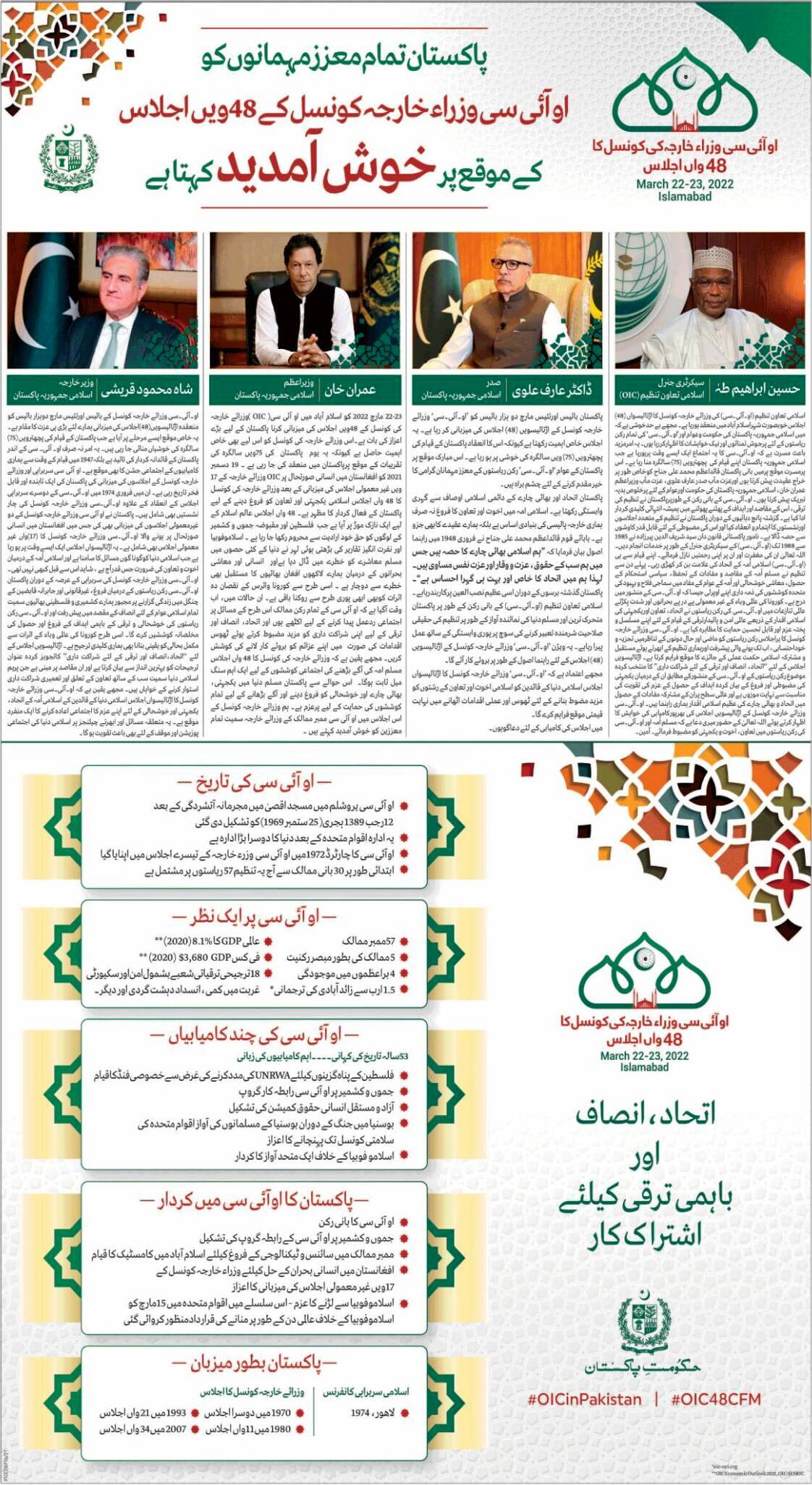 After the OIC meeting which will continue till 6.30 pm today, there will be a joint press conference of Foreign Minister Shah Mehmood Qureshi and OIC Secretary General in which the media representatives will be briefed on the proceedings and decisions of the meeting.

The federal capital Islamabad will have a local holiday on Saturday and Monday. Holidays have been announced for three consecutive days. Strict arrangements have been made for the security of the guests during the OIC meeting. Ordinary citizens will not be able to enter the red zone.

Police in the federal capital Islamabad have issued a traffic plan ahead of the OIC foreign ministers’ conference, under which various areas, including the red zone, have been closed to normal traffic from today. From March 21 to 24, along with the red zone, Serena Chowk, Express Chowk, State Bank Chowk and Ayub Chowk will remain closed for normal traffic. Serena Chowk and Margalla Road will be used as entry and exit routes in the red zone.

You will be allowed to enter the red zone with a special permit. Unannounced barriers will also be set up on Srinagar Highway, Murree Road, Islamabad Expressway for short duration. Police has directed the citizens of Islamabad to avoid unnecessary travel to avoid any difficulty. Officials say that if travel is necessary, a margin of at least 15 minutes should be maintained at the beginning.