The application form can be obtained from the Government Post Graduate College, Bannu during college hours or from the college online page. ELIGIBILITY CRITERIA:
Candidates possessing minimum Master’s Degree or BS 4 years Degree (16 years of education) with a minimum of Second Division. Candidates holding domicile of the district of the concerned college. In the case of non-availability of suitable candidates, domicile holder from the neighboring district can be
considered. Candidates not above the age of 35 years on the last date. Candidates are directed to submit the applications in the prescribed format along with attested copies of academic documents, recent photographs, an attested copy of CNIC & Domicile, and an updated CV on or before (minimum 15 days from the date of publishment of the advertisement.

TERMS AND CONDITION
Only shortlisted candidates will be called for Interview/Demonstration. Experience Certificates issued by recognized institutions will be accepted. Remuneration will be paid for the academic session only. No TA/DA will be admissible to the candidates appearing for Interview/Demonstration. Candidates shall clearly mention the name of the subject they are applying for, on the envelope. Prescribe quota for disabling and minority candidates will be observed. Hiring shall not confer upon him/her any right of regularization of services. All the positions will be only for merged areas and non-transferable. 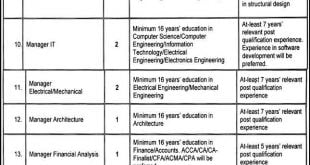 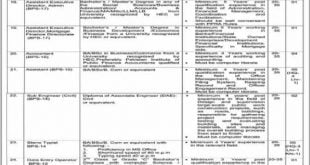