Pakistan Army Frontier Corps FC is seeing for the fresh candidates all over Pakistan. Applications are invited for employment from all the provinces (Punjab,  Balochistan, Sindh, KPK, Azad Kashmir, Gilgit Baltistan) and FATA Of all districts of Pakistan are qualified for Frontier Corps FC Pakistan Army Jobs. Qualified & Attracted candidates can apply for FC Balochistan jobs earlier than the last date. Particulars are given under.

Willing females of the province of Punjab, Khyber Pakhtunkhwa, Sindh, and Balochistan can apply for these vacancies. The females who are under the age of eighteen, their B-form will not be accepted rather CNIC is compulsory. If any employee presents bogus certificates/degrees of education will be handed over to the police. The department will give one year extra age relaxation for those who have the qualification of BA or higher. You can read full details and more information at the copy of the advertisement.

The same advertisement is for all and for the above mentioned four provinces. You can read the time and date of the interview along with their centers. Willing candidates can visit their local recruitment centers for recruitment. Detail of Recruitment Centers is as under: 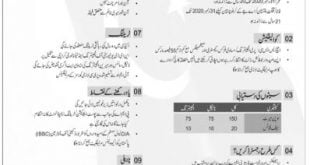 Join Pakistan Marine Academy as a Nautical or Engineering Cadet