Job / Arm Specific Vacancies: Following vacancies of Civilian Gazetted Officers (CGOs) are job oriented / Arm specific, for which selection will be made exclusively from officers belonging to specified Arms or possessing precise qualifications peculiar to the nature of specified jobs.

Method of Selection: Applicants will have to appear before a Special Selection Board at GHQ, Rawalpindi at their own expense. Period of Employment: Appointments will be made for a period of 3 years extendable by 01 year, based on performance and recommendations by the respective organizations.

Liability of Service: Selected Officers will be required to serve at any station in Pakistan. Application forms can be obtained from Portal of AG’s Branch (CP Dte / CP-IV) GHQ Rawalpindi / nearest Station Headquarters. Photo Copied Forms may also be used. Applications (in duplicate) along with 2 x Photographs (1 w‘ x 1 w‘) and copy of certificate of civil qualification as per required and a crossed Bank Draft Rs. 2000/- in favour of DCP be submitted to AG’s Branch, CP Dte (CP-IV) GHQ Rawalpindi within Twenty days after publication of advertisement in newspapers. Deputy Assistant Director Civilian Personnel CP Dte, GHQ Rawalpindi 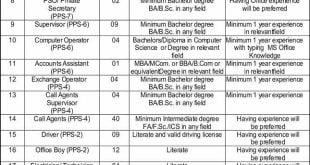 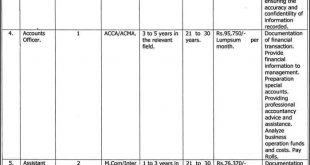