The final match of the Super Four stage of Asia Cup T20 will be played today between Pakistan and Sri Lanka. After which the final of the tournament is also scheduled between these two teams on Sunday.

The match to be played in Dubai today will start at 07:00 pm according to Pakistani time, for which two to three changes are likely to be made in the Pakistan team. The teams of Pakistan and Sri Lanka have won their three matches in total in the Asia Cup, while both the teams were defeated in one match each in the group stage. 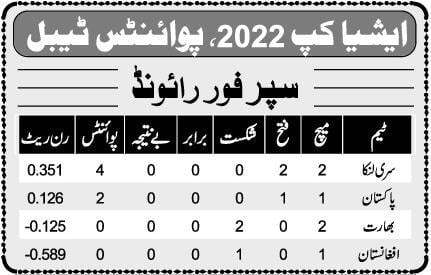 In the Super Four stage, all the teams have to play 3, 3 matches, Pakistan has to play their next two matches against Sri Lanka and Afghanistan, while the Indian team now has two matches left in which they must win, in case of defeat, the Indian team will be in the final. will be out of the round. The performance of the players in the Asia Cup, the players of Pakistan and India are overshadowed.

Mohammad Rizwan, the wicket-keeper batsman of the national cricket team, has scored the highest 192 runs in three innings in the tournament so far, in which his average is 96 runs.

Former India captain Virat Kohli has returned to form in the tournament after three years, scoring 154 runs at an average of 77 in 3 matches, including two half-centuries, while his best score is 60.

The event is going very well for national cricket team all-rounder Mohammad Nawaz, who played a major role in Pakistan’s win against India, the left-arm spinner has taken the highest 7 wickets in three matches at an average of 9, including 5 3 wickets for runs is the best performance, his economy rate is 6.51. Nawaz has also scored 43 runs at an average of 22 in two innings.

After defeating Sri Lanka in the group round, Afghanistan’s player Mujibur Rahman, who played a threat in the event, has bowled brilliantly so far, he has taken 7 wickets in the event, while 16 has been his best score.

National cricket team’s leg-spinner Shadab Khan has taken 6 wickets in three matches, in which 4 wickets for 8 runs is the best, his economy rate is 5.43. Shadab has only got a chance to bat once in which he scored 10 runs.

Pakistan’s next test will be in the match against Afghanistan on Wednesday. The Afghan team was defeated by Sri Lanka in the first match of the Super Four stage. Both Pakistan and Afghanistan have the services of aggressive batsmen and excellent spinners. The green shirts have more options in bowling, a win will ensure Pakistan reach the final.